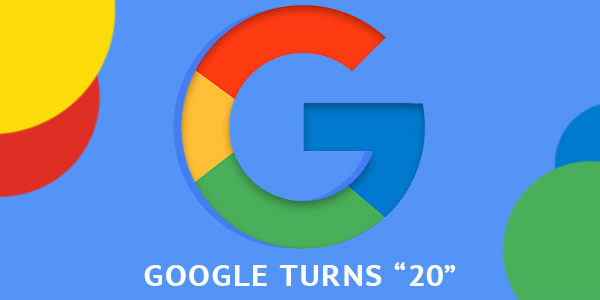 Google Turns 20 now – Google started out as a simple search engine in 1998 and has turned into one of the most important and influential companies in the world. On 27-09-2018, the company celebrated its 20th birthday, and although searching for something on the internet has commonly become “googling”, the company itself has become a part of the everyday lives in more ways than one.

On Google’s 20th birthday, here’s a reminder of how dominant it’s become
Google has turned 20 and in the past two decades the company has swollen in both its size and ambition.
It has eight products with over a billion users and owns the dominant search engine, browser, and mobile operating system.
Overall, its advertisements reach over 90 percent of worldwide internet users.

Google blog
“Twenty (ish ????) years ago, two Stanford Ph.D. students launched a new search engine with a bold mission to organize the world’s information and make it universally accessible and useful. Though much has changed in the intervening years—including now offering Search in more than 150 languages and over 190 countries—Google is still dedicated to building products for everyone,” Google mentioned in a blog post today.

Google Penalties: All You Need To Know

What is a Google penalty? A website that contains content that is in violation of the Google-enforced marketing standards ...

Possessing your Facebook Ad account or page hacked is an anxiety-inducing scenario. Most often, hackers break into an ad acco...